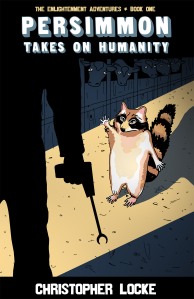 There’s a fabulous new book that impressed our director and one of our campers enough that we wanted to share a review of it here. The book is called Persimmon Takes On Humanity, by Christopher Locke, whom we are thrilled to have interviewed here.

The story follows Persimmon, a clever and compassionate raccoon, who teams up with her loyal forest friends to rescue any creature they see suffering at the hands of humans. What the team doesn’t know is just how rampant this violence really is, and soon their exciting rescue missions turn shockingly dangerous and deadly. The enthralling adventure tracks the courageous critters as they risk their own lives in various precarious situations—on a factory farm, on a fur farm, and in the circus—and challenges readers to examine their own relationship with animals and question what being humane really means. 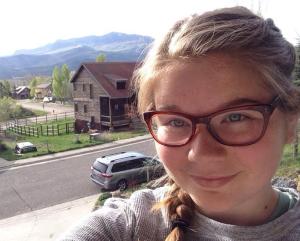 When we found out that one of our most accomplished campers, Claire Tamburello, who is going to be a counselor in training (CIT) at our Animal Advocates camp this summer, absolutely loved and was strongly impacted by Persimmon — as in “I couldn’t stop thinking about it for days. Definitely changed how I approach activism!!!), we knew we wanted her to write the review and interview Chris. Take it away, Claire!

I found Persimmon Takes On Humanity to be an inspiring tale of bravery and compassion with shocking elements of truth. The lovable characters capture the reader’s interest, while their heartbreaking experiences in the world of animal exploitation rouse the reader’s compassion. This book is eye-opening to those who aren’t aware of cruelty towards animals and a battle cry for those who are. One of the first books of its kind, Persimmon Takes On Humanity offers an entirely new perspective on animal rights and activism — it’s told from the view of the animals, rather than their advocates. A definite must read for anyone with a heart!

CT: You are obviously very passionate about animal rights. How did you get involved in the movement?

CL: In 2004, I read Fast Food Nation, and the sections in the book that describe the horrors that animals endure in factory farms shook me to the core. I have always considered myself to be a proponent of progressive issues (women’s rights, workers’ rights, LGBT rights and so on), but I realized that when it came to animals’ rights my actions didn’t line up with my ethics. How could I consider myself to be an ethical person when I was contributing to other animals’ suffering?

So I immediately stopped eating meat and when I learned about the abuse animals go through in other industries—such as chickens in the egg industry and cows in the dairy industry—I decided that I had to stop being a part of any type of exploitation of animals. And because the suffering of these animals is so widespread, I felt that it wasn’t enough to just not eat them, wear them and use them for entertainment, I had to also inspire others not to participate in this abuse. Ever since then I’ve been advocating for animals however and wherever I can.

CT: What would you say was your biggest motivator to write Persimmon Takes On Humanity?

I had been an animal advocate for years—attending protests, leafleting, volunteering for various organizations—but I always felt that my greatest contribution to the cause would be through my passion as a writer. I wanted to write something that would inspire others to be more compassionate toward animals, and Persimmon Takes On Humanity is the exact mix of entertainment and education that I was seeking.

From the time people are young, most humans are taught that other animals have been put on Earth for us to use as we please (to eat them, to wear their skin and fur, for entertainment), but animals have just as much right to be free as humans. They feel pain like we do. They feel fear. They want to bond with their families. So with this novel, I felt that if I could show what the world is like from the animals’ perspective, and not only help people see how much pain they’re causing other animals but really feel that pain, that it might reawaken their compassion for animals.

I’ve had a lot of people tell me that they cried while reading the book, and that’s actually a good thing. That means that they were rooting for the animals in the book to be saved from the horrid places in which they’re trapped. And hopefully when that person goes to eat dinner that night they’ll choose a delicious plant-based meal instead of eating a dead animal.

CT: What was the hardest thing about writing your book?

CL: Writing the novel was pure joy. I adored creating these characters and coming up with a thrilling adventure that has surprising twists and heartbreaking moments.

The hard part was going through the publishing process. I had absolutely no idea what I was getting into. It took a year to get the book copyedited, get the cover designed, get the interior designed, set up my own publishing company and many, many other overwhelming tasks. I am so proud of the finished product, because the book is exactly as I had envisioned (for example, I was lucky enough to get a brilliant artist named L.A. Watson to design the cover and she did such a phenomenal job), but publishing the book was such a Herculean task that I had maybe two or three nervous breakdowns.

CT: Have you thought of writing a sequel?

CL: I’m actually writing Book Two as we speak. Persimmon Takes On Humanity is the first book of The Enlightenment Adventures, and there are two more in this YA series. It has been so much fun diving back into this world. I love these characters and feel as if they’re my friends, so it’s like I’m getting to hang out with them again. Of course, their journey is just as intense and dangerous as it was in the first book, so they’re probably wondering when I’m going to write a vacation scene for them. Just wait until they find out what I have in store for them in Book Three!

CT: Did you edit your book or did someone else do it?

CL: This book series is the most important creative endeavor of my life, so the only person I trusted as my editor was my wife [Jaya Bhumitra, Director of Corporate Outreach for  Mercy For Animals]. Not only is she a fantastic writer but she’s also an avid animal advocate, so she completely understands why I felt so compelled to write this story. Her editing notes were superb, and now that I’m writing Book Two, I can’t wait to hear her thoughts about this story. I just added a new character that I think is going to be one of her favorites of the series. For anyone who’s interested, currently her favorites are Derpoke and Rawly.

CT: Are there any other causes you’re passionate about outside of animal rights?

CL: As I mentioned above, I’m a big supporter of progressive issues, and many of them are being violated within the issue of animal rights. For example, as someone who considers himself a feminist, it’s enraging to me that mother cows, chickens, pigs and other animals are having their babies stolen from them soon after birth only to be slaughtered or exploited for their bodies. In terms of workers’ rights and the rights of undocumented workers, those who are employed in slaughterhouses are working in very dangerous conditions with little pay. The agriculture industry is also a major culprit of environmental hazards, including releasing heaping sums of greenhouse gas emissions and leaking lagoons of sewage into drinking water. And if you’ve ever seen an undercover video of places like factory farms and circuses, you know that bullying is occurring on a daily (and disturbing) basis. So if you care about social justice issues, you should also care about animal issues. They’re inseparably interconnected.

As a big fan of YEA Camp, I’m very happy that the camp gives young people the opportunity to develop their skills to tackle these important social justice issues—creating the next generation of powerful advocates (it’s also a LOT of fun from what I’ve heard). Thank you for dedicating your life to activism and for being such a great inspiration to other people your age. Likewise, I hope Persimmon Takes On Humanity inspires people to make the world a kinder place!

CT: What advice do you have for teens who want to help animals, or who want to make a difference for another cause?

CL: First of all, I want to commend any teenager out there who is dedicating his/her free time to fighting for a noble cause. It’s people like that who are going to make the world a better place for all of us.

My first piece of advice is to search online for an organization that advocates for whatever cause about which you are passionate and then, on their website, look for volunteer opportunities. Trust me, non-profits are always happy to hear from volunteers. If you’re interested in advocating for animals, Mercy For Animals is an excellent organization to check out. And, of course, the best way to help animals specifically is to not eat them, wear their skin/fur and not to exploit them for testing or for entertainment.

One final piece of advice is that you should seek other people who also care about the cause. It’s always helpful to build a community of activists. It makes activism an enjoyable activity and you have someone to lean on for questions or for moral support if you feel discouraged (or to celebrate with when you have a victory!).

I wish you all the best in your pursuit to change the world!

Thank you so much, Chris and Claire!

You can buy Persimmon Takes On Humanity for Kindle and in paperback here.

Note from YEA Camp: This book is intended for youth and adults 14 and up, as there are some very sad scenes that truthfully depict what happens to animals.

Youth Empowered Action (YEA) Camp is a summer camp for social change. Our life-changing leadership camp trains 12-17 year-olds to make a difference on a cause they care about. Since 2009, our weeklong overnight camps have helped more than 500 teens from all over the country get active in their community or school on causes like climate change, racism, LGBTQ rights, animal rights, bullying and more. Find out more and register to join us at www.yeacamp.org.
View all posts by YEA Camp →
This entry was posted in Youth Empowered Action and tagged animal rights, chris locke, christopher locke, jaya bhumitra, mercy for animals, persimmon takes on humanity, young adult literature. Bookmark the permalink.